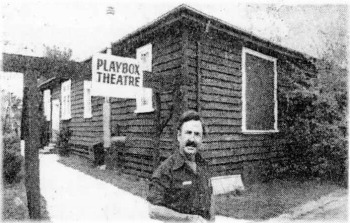 The photo to the right was taken in early 1983 outside the Playbox Theatre in Palmerston Street. Standing in front is Royce Barclay, then president of Playbox. This condemned building was the home of Playbox for more than 30 years. This photo came from a Waikato Times article about the future of Playbox, Musikmakers and TTT (Theatre Technique Trust), all of whom occupied different buildings around the same site.

Playbox have performed in many venues over the years. Some of these buildings no longer exist so we thought it would an interesting exercise to find some information about the performance spaces used by Playbox in the past.

- Winter S Hall (Winter Show Buildings)
These buildings were located on Ward Street in the CBD of Hamilton City. There were several buildings and they occupied the site along with the Hamilton City Council building (on the corner of Anglesea and Caro Street) and was bordered by Ward Street, Anglesea Street, Caro Street and Alexandra Street (now a no exit street called Worley Place). During World War II this site was used by the AirForce to repair and recondition aircraft engines. The planes were flown into Raglan, the engines were stripped out and carted over the hills to Hamilton where they were reconditioned. Aparently everyone in the CBD knew when they had re-assembled one of these massive engines because when they started it up, the whole town could hear it. The site is now occupied by the Hamilton City Council high rise building and the Downtown Plaza/Rebel Sports/Ezibuy complex along with the underground Alexandra Street carpark. Playbox performances were held in a part of the venue called the Winter Garden.

- Civic Theatre
Mr Sydney Tombs had controlling interests in Hamilton’s Kings and Civic theatres and built the Theatre Royal in 1913. The Civic Theatre with is large wooden façade (it was build with a Tudor style) was located at the south end of Victoria Street, where the 'Celebrating Age Centre' run by Age Concern now stands. Playbox used this venue prior to World War II. After leaks in the roof caused the stage to rot the Civic Theatre was used as a cinema. The Kings Theatre mentioned above was located on the corner of Victoria and Claudelands Road, currently where the TSB bank now resides.

- Theatre Royal & Embassy Theatre
Building of the Royal began in 1913 for Mr Sydney Tombs. When the Grand ole' Theatre Royal opened in 1915, it was lauded as the most beautiful provincial theatre in the dominion. In 1952, the Theatre Royal’s façade was radically altered in line with the popular practice in the 1950s to ‘cover up’ older architectural styles in buildings. The theatre also received a new name – the Embassy. In 1994 the Hamilton City Council deemed the building to be of no value and it was demolished. The site on Victoria Street is now a park and is the site of a brass statue of Riff-Raff (a tribute to Richard O'Brien of Rocky Horror Picture Show fame). More information can be found here.

- Little Theatre (1947-1961) & Playbox Theatre (1961-1983)
From 1947 to 1983 this was the home of Hamilton Playbox. This building was part of the Airforce repair depot, left over from World War II. From 1947 to 1961 Playbox shared this space with 'The Peoples Theatre' and a kindergarten. After the disbanding of the Peoples Theatre a lease was negotiated with the City Council and the venue was renamed 'Playbox Theatre' and Playbox put on most the their productions here from 1961 to 1983. It was demolished in 1984 after it was condemned by the Hamilton City Council. The site on Palmerston Street was expanded for the St Peters Tennis Club.  Life member Al Williamson added some interesting points... When the building was the Little Theatre, in order to gain access to the building the user had to obtain a key from the council. Al managed to get his own key so that he could go in whenever he needed to setup equipment. There was a chap from the council who lived down the road and passed the theatre when going to and from work. If he saw any unauthorised activity in there he laid a complain with the council, so Al would black out all the windows when he was inside so that no-one could see inside. The other buildings on the same site also was home to Theatre Technique Trust (TTT), Musikmakers and the Post Office Telephone Repair Depot.

- Roxy Theatre
Although the Roxy Theatre in Frankton was never used by Playbox, it does have a brief link with the society. This building was located on Hall Street in Frankton, next to the Frankton Hotel (pub). In 1962 the Roxy Theatre (by that time called the Vogue Theatre) was closed by Kerridge Odeon due to dwindling audience numbers. Kerridge Odeon offered Playbox the sale of the building and even offered to loan Playbox the £12,000 required to purchase the premises. The cinema had a capacity of approximately 500 seats but did not have a stage (it was a picture theatre after all). The building was in good condition and was simply no longer economic to run as a cinema for the Kerridge Odeon company. Ultimately the building was turned down and it was demolished a short time later.

- Founders Theatre
The Founders Theatre was Hamilton's largest theatrical venue with a capacity of 1,250. Opened in 1960. Located on the triangular corner of Tristram Street and Norton Road. This venue was used for Playbox's professional productions.  Founders Theatre was closed for safety reasons in 2016. With the Waikato Regional Theatre set to open in late 2022, the city and region will get a new world-class performing arts space.  More information can be found here.

- Matamata Little Theatre
This venue is located on Short Street in Matamata (aka Hobbiton).

- St Peters Cathedral
This is the Anglican Cathedral located at the top of the hill at the south end of Victoria Street in Hamilton. More information can be found here.

- Cambridge Town Hall
This venue is located on the corner of Queen and Victoria Streets in Cambridge. More information can be found here. 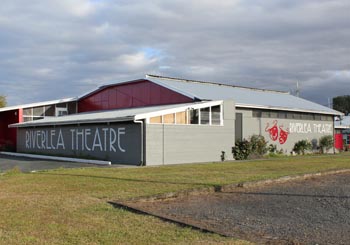 - Riverlea Theatre (1984-Present)
Since 1984 Riverlea Theatre has been the home for Hamilton Playbox and Hamilton Musical Theatre (formerly Musikmakers (Hamilton)). When the building was taken over it had been empty for some time and was essentially derilect. The Riverlea Theatre and Arts Centre (Inc.) was established in 1984 to oversee the management and conversion of the old Riverlea Ballroom into a theatre and "home" for Hamilton Playbox Repertory Society (Inc.) and Musikmakers (Hamilton) Inc. Thanks to the support received from patrons, Hamilton City Council, The Arts Council, and a number of commercial organisations, Riverlea Theatre has become, and is recognised as, a valuable community asset. Amongst the tasks that need to be done to convert to a theatre: build a flexible stage, build auditorium rostrums, install lighting system (plus electrical system that could support it) and sound system, fit out a commercial kitchen and bar, extensive interior decoration, installation of air-conditioning, construction and fitting out of a separate workshop facility, fit out of wardrobe storage and shop, fit out of rehearsal studio. While most of this happened in the first few years, the on going maintenance, the need to adopt new technologies and opportunities that arise means investment in the facilities is continuous. In 2009 Riverlea Theatre Trust celebrated the 25th anniversary that the building has existed as Riverlea Theatre (our temporary home since 1984). More information can be found here.

A comprehensive history of the move of Playbox, Musikmakers and Theatre Technique Trust (TTT) to Riverlea Theatre has been compiled by Alistar Barnett and can be found by clicking on the link below.

The move to Riverlea Theatre